Victoria Woodhull worked as a child preacher and fortune teller, before entering politics.

Woodhull was a pioneering radical, a feminist, and an early adopter of the Free Love movement. But for our purposes, Victoria Woodhull also was first and foremost an occultist, a woman who claimed powers of clairvoyance and the ability to communicate with spirits. On the occasion of her birthday this month — she was born on September 23, 1838  —  The Austin Séance Journal  examines the fascinating life and legacy of Victoria Woodhull, a woman of firsts.

To say she had humble beginnings would be an understatement. Born before dawn in Homer, Ohio, Victoria was the seventh of ten children. Although an exceedingly bright girl, she was not educated past the age of 11. Her mother, Roxanna “Annie” Claflin, was a follower of Franz Mesmer, the Austrian mystic, while her father Reuben Buckman “Buck” Claflin was a snake oil salesman and grifter.

Mother Annie was also a religious zealot who performed healings while father Buck trotted out daughters Victoria and Tennessee in public, traveling the country with their medicine shows. The country was enamored of child mediums, thanks in large part to the success of the Fox sisters, and Victoria (then known as Victoria California Claflin) was forced to work as a child preacher and fortune teller while Tennie worked as a “magnetic healer.” Both also performed as faith healers and clairvoyants who supposedly spoke with the dead. Woodhull’s biographers claim that her father was a violent man, having beaten, starved, and possibly sexually abused his children. The family was nomadic, as they were often chased out of town under accusations of fraud, theft, or prostitution.

Victoria may have had an actual gift for being a psychic. At age three, she passed out in grief when a beloved neighbor died. She claimed that while unconscious, she had a vision in which she experienced a sensation like flying, was surrounded by white light, and met several spirits who would appear to her for the rest of her life: the Greek orator Demosthenes, Napoleon Bonaparte, and Josephine. They convinced her that she was destined for greatness, like her namesake, Queen Victoria. Indeed, Victoria would claim that her spirits guided her throughout her life.

At 15, Victoria married 29-year-old Canning Woodhull, a doctor who was also a morphine addict, an alcoholic and womanizer. They had two children — Byron and Zulu Maud. Byron was born with severe intellectual disability, which Victoria blamed on her husband’s alcoholism. The marriage was miserable, and she often had to work alone to support the family. After her daughter was born, she divorced Woodhull but kept his name. Her controversial support for the concept of “free love” — that women should have the freedom to marry, divorce and bear children without government interference — was undoubtedly influenced by her experience with Mr. Woodhull.

In 1864, while working as a “spiritualist physician” in St. Louis, Victoria was consulted by Colonel James Harvey Blood, Civil War veteran and President of the St. Louis Society of Spiritualists. Woodhull fell into a trance, telling Blood that they were destined to marry, and they were “betrothed on the spot by the powers of air.” Soon after, Blood left his wife and children to tour with Woodhull as “Dr. and Mrs. James Harvey,” a clairvoyant and her manager. It was a bit unclear whether they ever married or not, or whether Blood ever divorced his wife.

Woodhull claimed to heal her “patients” with assistance from her spirit guides, and she also recounted hearing many “tales of domestic horror” during healing sessions that forever influenced her opinions on marriage.

In 1868, supposedly commanded by Victoria’s principal spirit guide Demosthenes, Victoria and James moved to New York City, joined by sister Tennie, to fulfill the prophecy of Victoria’s greatness at long last. Woodhull the clairvoyant would soon become Woodhull the political force of nature.

In 1870, with the backing of railroad tycoon and philanthropist Cornelius Vanderbilt, (who was also rumored to be Tennie’s lover) Woodhull and her sister opened a brokerage firm on Wall Street, becoming the first women stockbrokers in US history. Vanderbilt, who had lost his wife, was an avid Spiritualist and was impressed with Victoria and Tennie’s talents for contacting the dead.

The sisters were quite successful with their brokerage, and they soon established the Woodhull and Claflin’s Weekly newspaper, which they described as a “celestial mandate” from the spirit guides to promote their controversial ideas about women’s suffrage, free love, fair labor practices, short skirts, Spiritualism, and communism.

According to her biographers, it was Blood who introduced Woodhull to the doctrine of free love, as espoused by followers of Spiritualism.

In a speech delivered in 1871 at Steinway Hall in New York she said:

“Yes, I am a Free Lover. I have an inalienable, constitutional and natural right to love whom I may, to love as long or as short a period as I can; to change that love every day if I please, and with that right neither you nor any law you can frame have any right to interfere.”

Notorious for her impassioned, mesmerizing speeches, she soon gained a following. She claimed her spirit guardian Demosthenes possessed her to write “The Memorial of Victoria C. Woodhull” — a sort of political manifesto —  and she then took the opportunity to present her “Memorial Argument” for a woman’s constitutional right to vote to the House Judiciary Committee in 1871. Unfortunately, her pleas fell on deaf ears, and it wasn’t until many years later that women won the right to vote in 1920.

At its annual convention on May  9,1872, the National Woman Suffrage Association decided to form the Equal Rights Party, electing Woodhull to run for President. She wanted her running mate to be former slave and activist Frederick Douglass, though he apparently never accepted the offer.

Woodhull’s presidential campaign was sensational and positioned her for intense scrutiny and harassment.  Harper’s Weekly published a full-page caricature of her dressed in black with demon wings, holding a sign saying “Be Saved By Free Love,” while a woman carrying babes in arms and an alcoholic husband struggles in the background, rejecting Woodhull with the caption: “I’d rather travel the hardest path of matrimony than follow in your footsteps.” The cartoon was titled “Get Thee Behind Me, (Mrs.) Satan!”

After an exciting but failed run for office, during which Woodhull was vilified and even jailed on election night for publishing “obscene” accounts of a famous pastor’s illicit affair (which led to expensive court trials), her political career was basically over.

She became a colorful leader in the women’s movement, but her ideas were deemed too radical and potentially damaging to the movement. At one point Woodhull was elected president of the Association of American Spiritualists, describing it as “the chief honor of her life.” But by 1875 the Weekly had begun to promote Catholicism and to expose Spiritualist frauds. Woodhull grew increasingly more conservative in her religious views, touting purity of body and mind, renouncing her own past.

She left Blood, and in 1877 she departed for England with her sister and her children. In England, she lectured extensively on women’s rights and eugenics. She married John Biddulph Martin in 1883, made two mock runs for the U.S. presidency, and with her daughter published the conservative The Humanitarian, focusing on eugenics, from 1892 to 1901. Martin died in 1897, Tennie died in 1923, and Woodhull remained active until her death in Worcestershire in 1927. 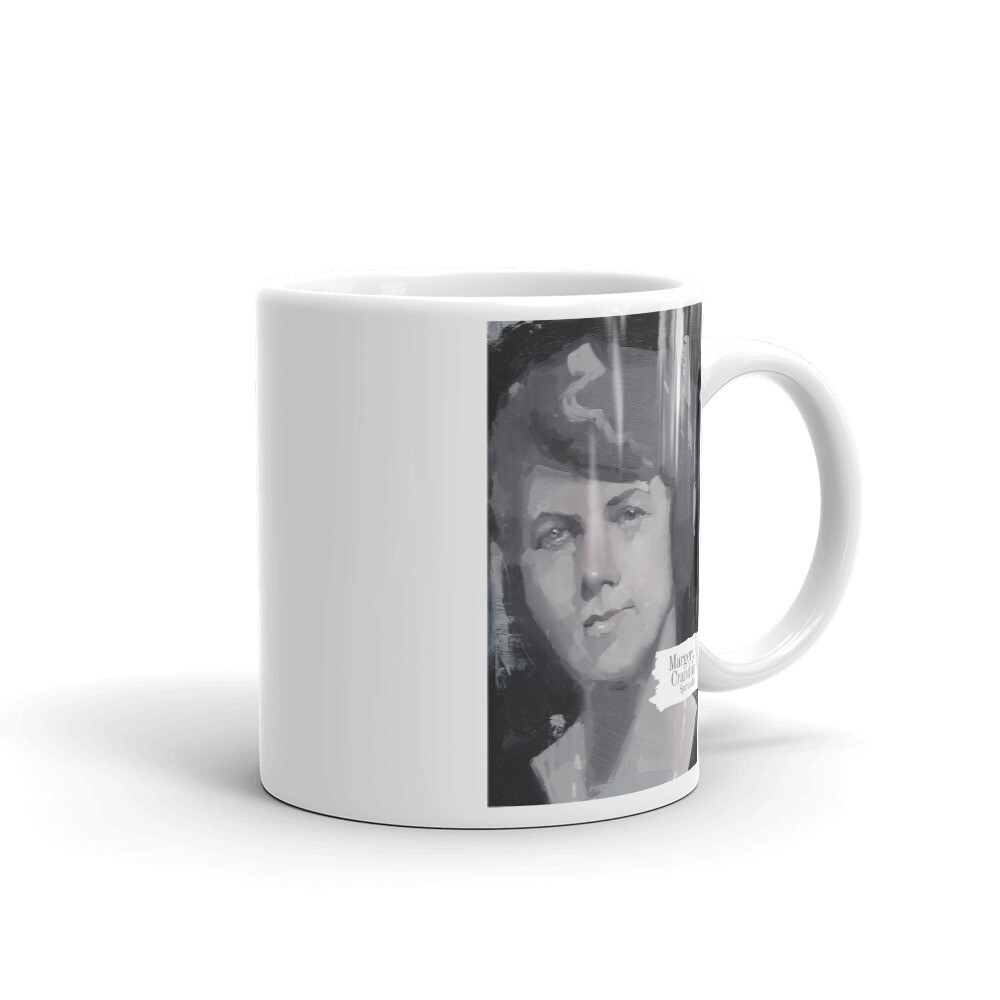 Drink your coffee with Mina "Margery" Crandon, one of America's most famous spiritualist mediums. This mug features an image by the artist Emerson Schreiner, commissioned exclusively for The Austin Séance. Please be advised that because of the COVID-19 pandemic, merchandise deliveries by our third-party vendor may be delayed by several weeks.