The foremost theoretician of Theosophy, Madame Blavatsky was a philosopher and world traveler.

Spiritualist and occult visionary Helena Petrovna Blavatsky was born into a storied, aristocratic family in a part of the Russian Empire (now Ukraine) as Helena von Hahn on August 12, 1831. She was the oldest child of three, and largely self-taught, though versed in all the “feminine” arts of music, art, and French. Her mother was an accomplished author, her father a military officer, and the family traveled widely for her father’s career, which is perhaps what whet young Helena’s appetite for adventure later in life.

But most importantly for our purposes,  Helena Petrovna Blavatsky would become world-famous as an occultist, and in 1875 she co-founded the Theosophical  Society — which continues to this day. Having influenced the likes of Rudolf Steiner, W.B. Yeats, Henry Miller, Thomas Edison, and Mohandas Gandhi, to name a few, this remarkable woman was a compelling albeit polarizing historical figure. On the occasion of her death anniversary — she died 120 years ago this month —  we examine the life and accomplishments of the freethinker known the world over as Madame Blavatsky. A philosopher, a writer, and world traveler,  Madame Blavatsky was the foremost theoretician of Theosophy, and is regarded by many as the mother of today’s New Age movement.

Often described as a taciturn and beguiling child, Helena was likely first exposed to the  occult and religious mysteries in her freemason great-grandfather’s library, where she  spent hours as a teenager reading his collection of esoteric works. During this time, she was introduced to practitioners of Tibetan Buddhism, and began having visions of a  “mysterious Indian” man, whom she later met in person and became his devotee.

Helena married at age 17 to a man who was decades her senior, Russian military  officer Nikifor V. Blavatsky. After a few months, and several escape attempts, she ditched the supposedly unconsummated marriage and was on her way back home,  when she ended up making a detour to Constantinople on an English shipping vessel.  Her family did not hear from her again for nearly nine years.

Her thirst for knowledge of the esoteric, of ancient wisdom, secrets, and philosophies  took her all over the globe for the next twenty-five years.

Although largely uncorroborated, according to The Paris Review, “Among the claims Blavatsky made about this time—or that were made about her—are that she smoked hashish with the Universal Mystic Brotherhood in Cairo, studied voodoo in New Orleans,  found a lost Incan treasure in South America, performed as a concert pianist in  England, visited the Mormons in Salt Lake City, was wounded and left for dead fighting alongside Garibaldi, survived two sea disasters, had an affair with Italian opera singer  Agardi Metrovich, discovered an ancient language called Senzar, and studied in Tibet with a group of “Masters” who would later become central to her Theosophical  teachings.”

Indeed, it was in London, in 1851, that she met the “mysterious Indian” Master Morya, who had  appeared to her in childhood visions. Morya was one of two Masters, the other being Koot Hoomi, whom Blavatsky called “Adepts,” or guardians of the Secret Doctrine itself. Of course, her critics have said that no such teachers existed. But Blavatsky claimed that she communicated telepathically with them, and said she owed them all the knowledge she obtained  throughout her life.

In 1858, she returned to the Russian Empire to her family. A horseback riding accident put her into a coma for several months. Upon waking, she proclaimed to have  developed complete control over all her supernatural abilities.

Her sister Vera said, “Raps and whisperings, sounds, mysterious and unexplained, were now being constantly heard wherever the newly arrived inmate went.” Vera also  described an incident where “All the lights in the room were suddenly extinguished, both  lamp and wax candles, as though a mighty rush of wind had swept through the whole  apartment; and when a match was instantly struck, there was all the heavy furniture,  sofas, armchairs, tables standing upside down, as though turned over noiselessly by  some invisible hands.”

Between 1860-1870 Blavatsky contends that she traveled, by way of India, to Tibet, where she and Master Morya stayed with Master Koot Hoomi. She also claimed to have  learned Senzar, the language of Atlantis, and to have become clairvoyant, mastered  telepathy, mind control, and that she could materialize and dematerialize objects.  Skeptics note that Europeans were not allowed in Tibet at that time, though some biographers believe that she may have traveled there in disguise, and her knowledge of Mahayana Buddhism was undeniably authentic.

Blavatsky arrived in New York City in 1873 and became a hit as a spirit medium; Spiritualism was all the rage, though she disagreed with the notion that the entities being contacted were the  dead. At a séance in Vermont, she met reporter, lawyer, and Civil War veteran Henry Steel  Olcott, who was immediately drawn to her. They soon moved into an apartment together, held gatherings and hosted events. Thus began a collaboration that would eventually lead to their co founding of the Theosophical Society. The word “theosophy” comes from the Greek, meaning  “wisdom of the gods.” Blavatsky described Theosophy as “the synthesis of science, religion and  philosophy.”

1877 saw the publication of her famous work, the massive and dense Isis Unveiled. Written with the help of an “observer” self that Blavatsky called “the  lodger,” Isis Unveiled  put forth the principles of Theosophy.  Her underlying thesis was that everything ultimately stemmed from one Ancient Wisdom.  “Isis”  was a great commercial success, selling out over 1,000 copies its first week of publication.  Henry Miller proclaimed it one of the “top ten books” ever written.

She briefly married again, and divorced. In 1878, she became a US citizen. In 1879, Blavatsky and Olcott relocated to India to establish the headquarters of the Theosophical Society. In an unusual move, they officially converted to Buddhism, the first Westerners to do so. They founded the journal The Theosophist, and their movement grew wildly popular. But in 1884, public claims from within the Society against Blavatsky divided the community. Shortly thereafter, the London Society of Psychical Research investigated her, and reported her to be a fraud. (Later it was found  that their investigation was biased.)

Having been diagnosed with many ailments, including kidney failure, Blavatsky resigned from the Society, returned to Europe, and completed The Secret Doctrine, her most  important work, in 1888. Supposedly the unedited manuscript was three feet high.

In 1891, Blavatsky was living in Britain when she contracted influenza. She died on May  8, 1891, at the home of her successor, Annie Besant. She published two more books — The Key to Theosophy and The Voice of the Silence — before her death. “In life HPB  had a habit of moving one foot when she was thinking intently,” an observer reported,  “and she continued that movement almost to the moment she ceased to breathe.”

Theosophists still celebrate the day of her death as White Lotus Day.

Criticisms of her and her work include accusations of anti-Semitism, racism, and plagiarism. It has also been said that her work inspired Nazi doctrine and ideology.  Conversely, Theosophy promotes the idea of a universal humanity regardless of race or gender.

As Rick Fields characterizes her in How the Swans Came to the Lake: A Narrative History of Buddhism in America,

“She did not put on spiritual airs. She smoked (tobacco continuously and hashish on  occasion) and had a bawdy Rabelaisian wit. She was at once one of the boys (Olcott  called her ‘Jack’) and an aristocrat who knew so little about cooking that she once tried to boil an egg by placing it on the bare coals. She was a complex, moody woman given to sudden alternations between flirtatious charm and violent outbursts.”

Mme Blavatsky’s principal books were Isis Unveiled (New York, 1877), The Secret Doctrine, the  Synthesis of Science, Religion and Philosophy (1888), The Key to Theosophy (1891). 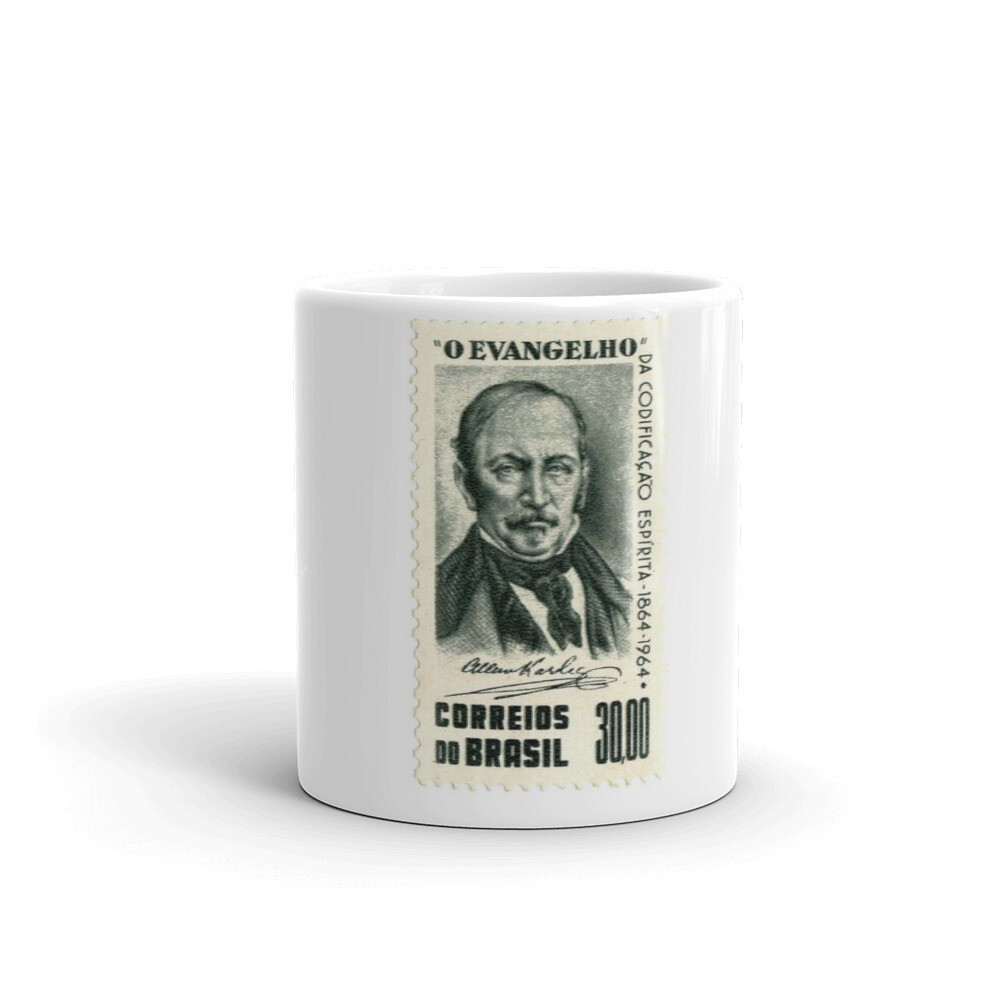 19th Century French educator Allan Kardec founded Spiritism and his influence was so keenly felt worldwide that his image even appears on postage stamps. This coffee cup from The Austin Séance features a reproduction of one such stamp from Brazil, where Kardec had many followers. Please be advised that because of the COVID-19 pandemic, merchandise deliveries by our third-party vendor may be delayed by several weeks.